In order for one to hear sound it must travel through air (gas particles) of which space has very few per cubic centimeter. Sound can only travel through a solid, liquid or gas. Space being an almost perfect vacuum does not allow sound to travel and be heard by the ears. Sound is vibrations of air particles, so any “sound” that is heard in space has to come from other means such as from the electromagnetic spectrum and these waves are not sound. 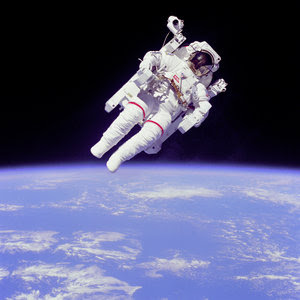 As such, astronauts communicate with each other in space when they are spacewalking through the use of radio waves. Radio wave signal are sent to their headsets which then translates the signal into the form of sound . When receiving and sending message to earth it is sent in the form of radio waves which is then translated to sound wave (message) by a radio set. Radio wave is a part of the light spectrum called electromagnetic spectrum (see diagram below ) and is therefore a light wave. Light does not need a medium to travel and this, further explains why the Sun’s light travels through space to earth. Light waves are not sound waves.

Astronauts can however, talk to each other as if they were on Earth only when they are in their space ship. Here, there are enough air particles to vibrate and take the sound to their ear drum.

What is a neutron star?